A virus must outpace innate immunity before the adaptive immune system attempts to clear it from the organism. Responsible for orchestrating many of these innate immune responses are a group of relatively small proteins that are comprised of ubiquitin and ubiquitin-like proteins. UCR School of Medicine Professor Scott Pegan of Biomedical Sciences investigates the ability of WHO priority zoonotic viruses, such as Crimean-Congo Hemorrhagic Fever virus and SAR-CoV-2, to clip off these immune regulators from host proteins. He and his laboratory turn the tables on these pathogens by leverage this knowledge to identify opportunities for therapeutic intervention. This includes exploiting species to species differences among hosts ubiquitin-like proteins to provide molecular window into previous and future zoonotic cross over events for these types of viruses. Recently these efforts revealed the presence of an immunological pathway present in birds that is absent in humans. This discovery opens the door to better understanding of key immunological features in birds that can lead to better agricultural vaccines as well as how they can serve as reservoirs for often fatal human pathogens.

Increased intestinal permeability plays a crucial role in the development of the chronic intestinal inflammatory conditions Inflammatory Bowel Disease (IBD), Celiac Disease, and Type 1 Diabetes. The laboratory of Associate Professor of Biomedical Sciences Declan McCole of the UCR School of Medicine has identified a completely novel role for a risk candidate gene (PTPN2) that is associated with all of these conditions, in protecting epithelial barrier function from cytokine-induced barrier defects. Researchers have identified novel molecular targets that are modified by the increase in JAK-STAT signaling pathways associated with disease associated loss-of-function mutations in PTPN2 and are also using novel cell and animal models to identify therapeutic approaches to correct signaling and barrier defects caused by loss of PTPN2 function with pharmacologic and microbiologic agents.

Small Molecular Modulators for GLP1 Receptor for the Treatment of Diabetes

Glucagon-like-peptide-1 (GLP1) receptor holds several exciting promises for the treatments of diabetes and obesity, including increasing insulin secretion in the presence of high glucose, slowing gastric empty process, inhibiting glucagon release, reduce appetite and body weight, and stimulating ß cell differentiation and replication. The agents that either activate GLP1 receptor directly, such as Byetta, or increase the half-life of GLP1 peptide in vivo, such as Junuvia, have proven beneficial in the treatment of diabetes and potentially obesity. Small molecular agonist and/or sensitizer are a new oral approach to fully realize GLP1 receptor activities in vivo. Associate Professor of Bioengineering Jiayu Liao of the UC Riverside Department of Biochemistry is leading an effort to discover small molecular modulators that have excellent potential for use in both monotherapy and combination with established agents, such as Byetta and Junuvia. Extensive efforts in many pharms and laboratories have failed in the identification of a drug-like oral available small molecular agonist or sensitizer for GLP1 receptor. A small molecular agonist or sensitizer may hold the first/best in the class opportunity of GLP1 receptor for diabetes and obesity treatment, representing an innovative oral therapy for treatments of these diseases to achieve desired therapeutics index.

Read more about modulators for the GLP1 Receptor

The Immunology of Infectious Diseases

UCR School of Medicine Assistant Professor of Biomedical Sciences Meera Nair's laboratory investigates infections of the lung and the gastrointestinal tract, which are especially debilitating because these organs provide essential physiologic functions for the host including oxygen and nutrition uptake respectively. Her research utilizes mouse helminth and bacterial infection models to investigate how macrophages contribute to mucosal immunity and inflammation. In particular, the laboratory is focusing on the Resistin-Like Molecules (RELM), a family of secreted proteins that includes two human members. Specifically, the laboratory is actively pursuing two research avenues on RELM proteins that include (1) the function of RELMa and RELMb in bacterial and hookworm infection of mice, and (2) the function of human resistin in infectious disease employing humanized mouse models and studies of septic patients or patients that are chronically infected with helminths.

Read more about The Immunology of Infectious Diseases

UCR School of Medicine Distinguished Professor of Biomedical Sciences David Lo’s laboratory studies the mechanisms of immune surveillance in mucosal tissues such as the intestine and airways. Immune responses at these sites are critically important as the first line of defense against infectious diseases; more than two thirds of all infectious diseases enter the body at these sites. Therefore, new vaccine technologies aimed at inducing protective responses at mucosal surfaces will be important tools in the battle against emerging infectious diseases. Discoveries based on the lab's work have led to the design of novel vaccine technologies including a targeted needle-free mucosal vaccine for influenza. Another vaccine technology developed in the lab is based on an engineered bacterial flagellin filament. Using this filament scaffold design, the lab has developed a new T helper-independent vaccine design against Dengue virus. Ongoing research is aimed at improving vaccine design, storage stability and delivery formulations.

Read more about research into Immune Surveillance in Mucosal Tissues

The ubiquitin–proteasome system and ubiquitin-like protein pathways, such as SUMOylation, are critical in protein homeostasis and activities in vivo and are emerging as a new strategy to treat many acute and chronic human diseases, such as cancers and infections. Although various kinase inhibitors have been developed as target-based therapy, solid tumors are still challenges in clinical therapy because various resistant are developed after kinase inhibitor treatments, and therapeutic agents with novel mechanisms are urgently needed. SUMO has been shown to modify various critical proteins, such as p53, MDM2, Estrogen receptor and androgen receptors. More recently, a genome-wide siRNA screening shown that inhibition of SUMO E1 ligases can lead to synergistically lethality of c-Myc overexpressed breast cancer cells. However, so far, specific inhibitor of SUMOylation is still not available for the community. Associate Professor of Bioengineering Jiayu Liao has successfully discovered a novel small molecule inhibitor for SUMOylation using his newly developed FRET-based HTS. The inhibitor shows potent killing activity against several cancer lines, such as H358 lung cancer and Panc-1 pancreatic cancer cells. At the same time, researchers are targeting host-pathogen interaction aiming to develop novel anti-virus drugs. The SUMOylation has been shown to modify cytokine signaling pathways and modify influenza virus proteins directly. The SUMOylation inhibitor has shown very promising activity against influenza virus replication in cell culture.

Professor of Bioengineering Dimitrios Morikis of the Bourns College of Engineering is developing drugs and biomarker molecules targeting proteins of the complement system. The complement system is part of innate immunity and a link between innate and adaptive immunity, but its inappropriate regulation/activation is involved in nearly all autoimmune and inflammatory diseases. Morikis has designed complement-inhibiting peptides of the compstatin family for the treatment of age-related macular degeneration (AMD), and potentially for rare kidney diseases, such as atypical hemolytic uremic syndrome (aHUS), paroxysmal nocturnal hemoglobinuria (PNH), and C3 glomerulopathy (C3G), and other complement-mediated diseases. Other peptide designs are agonists/antagonists of complement receptors. The lab has also discovered chemical compounds with fluorescence properties that have the potential to become diagnostic biomarkers for AMD.

Associate Professor Emma Wilson's lab studies brain inflammation during Toxoplasma gondii infection. This protozoan parasite is very common in the human population is associated with many neurological diseases, for example schizophrenia, and can cause fatal pathology in immune compromised patients and during congenital infection. Wilson has demonstrated the dysregulation of the neurotransmitter glutamate during infection in the brain. By increasing the expression of glutamate transporters it may be possible to combat significant neuronal pathology including in children that are susceptible to seizures due to congenital infection.

The lab of Associate Professor of Cell Biology and Neuroscience Karine Le Roch is using functional genomics and systems biology approaches to identify key regulators of the human malaria parasite development and survival within their hosts. In particular, the laboratory is focusing on mechanisms regulating epigenetics and chromatin structure and how parasite factors involved in these processes control parasite development and pathogenesis. Specific proteins and regulatory pathways identified in our functional genomics approaches are validated using advanced molecular and cellular methodologies. Results of our studies have therapeutic implications as they can direct novel antimalarial strategies. In addition, in collaboration with chemists at the University of California, Irvine and the University of Puerto Rico, the Le Roch lab is working on the identification of new natural products (e.g. isothiocyanate, kalihinane diterpenoids) to inhibit parasite growth. We are also developing new high content imaging tools as well as molecular and genomics approaches to understand the mode of action of the selected compounds. We are committed to translate our potent compounds as a next generation treatment and transmission blocking strategy for drug-resistant human malaria parasites.

Age-related Macular Degeneration (AMD) is the most common cause of vision loss in the over-50 age group in the United States. Treatments are limited, but several key targets have been identified to be likely driving disease progression. Researchers in Assistant Professor of Biochemistry Jefferson Perry's laboratory are collaborating with Professor of Bioengineering Dimitrios Morikis and Assistant Professor of Bioengineering Kaustabh Ghosh of the UCR Bourns College of Engineering and researchers from Professor Kang Zhang’s laboratory at UC San Diego to identify novel inhibitors for the development of first-in-class treatments for AMD. 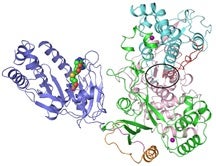 The outbreak of Zika virus (ZIKV) in the Americas and West Pacific islands in the past year has become a worldwide health concern. Increasing evidence has linked ZIKV infection to microcephaly in newborn infants, and to Guillain–Barré syndrome in adults. However, there are no licensed vaccines or therapeutics currently available for prevention or treatment of ZIKV infection. The research objective of this project, to be carried out in the labs of Assistant Professor of Biochemistry Jikui Song and Assistant Professor of Virology Rong Hai, is to develop novel small molecule inhibitors against the NS5 protein of ZIKV, which is responsible for viral genomic replication. Our recent structural study of full-length ZIKV NS5 demonstrated that ZIKV NS5 contains a potential drug-binding site that was previously identified for the closely-related Dengue virus (DENV) NS5 protein, suggesting the possibility of inhibiting ZIKV NS5 using the DENV NS5 inhibitors. Building on this finding, we propose to investigate the functional inhibition of ZIKV NS5 using the identified DENV NS5 inhibitors. Furthermore, we will perform structure-based drug optimization toward identification of novel and highly efficient inhibitors against ZIKV infection.

Cardiovascular and metabolic diseases linked to the PXR receptor and IKKβ

The lab of Dr. Changcheng Zhou is investigating two important signaling pathways, xenobiotic receptor PXR and inflammatory mediator IKKβ, in the pathogenesis of atherosclerosis, obesity, and metabolic disorders. Our recent work has revealed important new functions of these signaling pathways in the regulation of inflammation, xenobiotic metabolism, atherogenesis, obesity, insulin resistance, and bone homeostasis. Our findings have also provided evidence for using appropriate PXR antagonists and IKKβ inhibitors in the treatment of cardiometabolic disease.